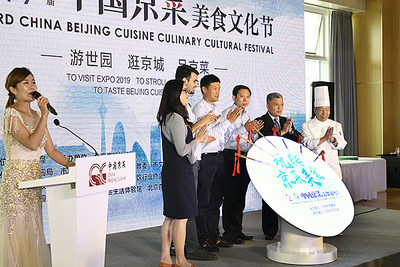 At the event, the Quan Ju De wheaten food cultural heritage, the knife skills of Dong Lai Shun, the skills of Tong He Ju, the Du Yi Chu's shao-mai technique, and other classical Beijing-style interactive performances will be showcased, bringing new visual and taste experiences to domestic and foreign tourists.

Beijing cuisine originated in the Liao and Jin Dynasties, took shape in the Ming and Qing Dynasties, developed in more modern times, and now thrives in the contemporary era. Characterized by cooking techniques such as stir frying, baking and simmering, it is a rich and heavy cuisine, reliant on soy sauce for flavor, and has a crisp taste. Careful selection of materials is paramount, as is meticulous cutting and shaping, as well as preparation and cooking rules. With great cultural significance, this style of cooking combines many flavors, and has very distinct Beijing characteristics.

According to Yun Cheng, Chairman of the Beijing Cooking Association, well-known Beijing cuisine stores and the renowned Beijing snacks are popular with people from all walks of life and of all ages. The Beijing Cuisine Culinary Cultural Festival aims to develop, organize and promote the Beijing dietary culture. These moves are designed to ultimately build a strong China Beijing Cuisine landscape, improve the quality of catering in the national capital and nurture the catering market, so that it flourishes, and gives great pleasure to diners. With the Beijing International Horticultural Exhibition as a stage, this event will highlight China Beijing Cuisine, and open the culture of Beijing style to other countries, helping them to experience the spectacular Touring Expo 2019 Beijing, Travelling Beijing, Enjoying Beijing Cuisine, and to prepare a feast so the world can share Beijing Cuisine together.

The China Beijing Cuisine at the International Horticultural Exhibition kicks off on August 30 and will continue until October 10.