- Sweeps up four awards in the Technology & Creativity category and the "Most Popular Game" award, including the Grand Prize 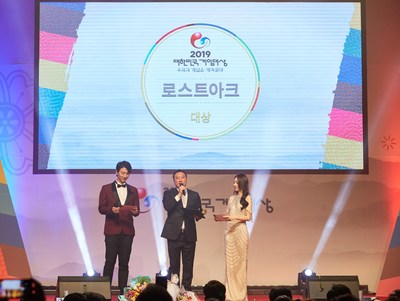 Lost Ark was named in six categories at the 2019 Korea Game Awards held in Busan on the 13th, including the grand "Presidential Prize," four "Technology and Creativity" categories (scenario, sound, graphics, and characters), and the "Most Popular Game" award, receiving recognition as the shining star of 2019.

Taking the stage to accept the award, Smilegate RPG CEO Chi Wongil said, "When everyone had their eyes on mobile games, we believed in the potential of online PC games and developed Lost Ark," and that "rather than rest on our laurels, we will continue efforts to expand our base by entering more overseas markets and hosting esports competitions."

Lost Ark is a mega MMORPG developed by Smilegate RPG over seven years since 2011. It exploded in popularity ever since public services began on November 7, 2018 and recorded over 350,000 concurrent users, the highest in Korea.

Lost Ark is an epic, original IP content in a vast fantasy world where the East meets the West and has been well received for its top-notch graphics and cinematic renderings as the most anticipated online PC game by RPG fans around the globe. For these reasons, it was pinpointed as the strongest contender for the grand prize at the awards ceremony, and received six awards.

The "2019 Korea Game Awards" is held in the highest regard in Korea, hosted in collaboration with the Ministry of Culture, Sports and Tourism, Sports Chosun, and Electronic Times and run by the Korea Association of Game Industry, reaching its 24th year in running this year since its inception in 1996.

In addition to Lost Ark, Smilegate had the honor of being awarded for the "Next-generation Game Award" for "Focus on You," VR game developed by Smilegate Entertainment.