HONG KONG, Oct. 21, 2021 /PRNewswire/ -- The growing demand for ocean resources is pushing marine ecosystems near to breaking point, a problem made worse by the climate crisis. On the latest episode of 'Inventing Tomorrow', CNN anchor and correspondent Kristie Lu Stout spotlights the entrepreneurs in Hong Kong, Israel, the United States and the Philippines who are finding ways to use the ocean more sustainably, stem the tide of pollution and safeguard this vital resource. 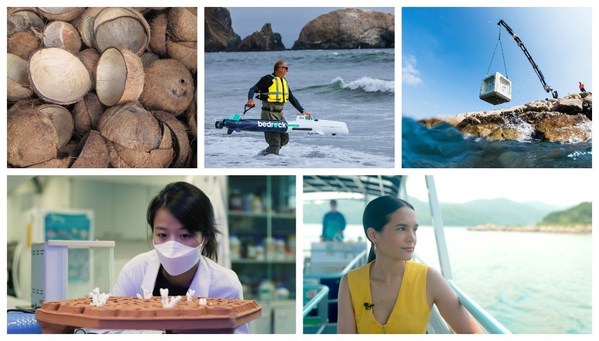 In the murky waters off the coast of Hong Kong, coral has persisted against the odds. Vriko Yu has worked with scientists from The University of Hong Kong to develop 3D-printed clay tiles that provide a stable foundation for reefs to grow. Yu and Associate Professor David Baker have founded startup archiREEF, in the hopes of attracting capital to fund future research and help regrow coral in areas where it has disappeared.

Just over 20 percent of the ocean floor is mapped today. U.S.-based startup Bedrock Ocean Exploration hopes to change that with its new breed of ocean technology: a seven-foot-long electric submarine equipped with sonars, cameras and lasers to help it navigate and catalogue the marine environment. CNN hears from the company's co-founder and CEO Anthony DiMare about how a fuller picture of the seabed could help marine industries build infrastructure without harming ocean life. Meanwhile, oceanographer Yi Chao has developed a way to power data-gathering machines renewably, harnessing energy from the ocean itself. He founded startup Seatrec in California to scale up the technology.

When humans build on coastlines, they often destroy the ecosystems sea creatures depend on. Marine biologist Ido Sella co-founded the Israel-based startup ECOncrete, which develops concrete blocks for coastal construction that match the neutral pH of seawater and mimic the shape and texture of natural rock formations, helping marine life to thrive. The company has installations across the world, including in Hong Kong, where marine pollution researcher Juan Carlos has helped install ECOncrete's tidal pool blocks as part of a trial to boost biodiversity on artificial shorelines.

Finally, CNN learns how Philippines-based startup Fortuna Cools developed a longer-lasting eco-friendly alternative to polystyrene coolers – using discarded coconut husks. The startup partnered with Justino Arboleda, a professor-turned-manufacturer who created technology to make insulation out of coconut husks as a way to provide extra income to local coconut farmers and reduce plastic pollution in the ocean.

CNN's portfolio of news and information services is available in seven different languages across all major TV, digital and mobile platforms, reaching more than 475 million households around the globe. CNN International is the number one international TV news channel according to all major media surveys across Europe, the Middle East and Africa, the Asia Pacific region, and Latin America and has a US presence that includes CNNgo. CNN Digital is a leading network for online news, mobile news and social media. CNN is at the forefront of digital innovation and continues to invest heavily in expanding its digital global footprint, with a suite of award-winning digital properties and a range of strategic content partnerships, commercialised through a strong data-driven understanding of audience behaviours. CNN has won multiple prestigious awards around the world for its journalism. Around 1,000 hours of long-form series, documentaries and specials are produced every year by CNNI's non-news programming division. CNN has 36 editorial offices and more than 1,100 affiliates worldwide through CNN Newsource. CNN International is a WarnerMedia company.