SHANGHAI, Sept. 30, 2022 /PRNewswire/ -- Music is a reflection of the harmony between heaven and earth, according to Book of Ritual and Music. On September 26, 2022, an astronomical art-themed concert entitled Chinese Music Talking to the Sky (Guo yue wen tian in Chinese) kicked off at the world's largest planetarium, Shanghai Astronomy Museum, in Lingang New City, Pudong New Area, Shanghai. During the hybrid online and offline event, renowned Chinese zhongruan virtuoso Feng Mantian (Ruan: traditional Chinese musical instrument with 2000-year history) and his band, in collaboration with InCulture, QQ Music and China News Service (CNS), delivered a truly delightful audiovisual experience to music fans worldwide. Concert engineers deployed analog surround sound technology allowing the audiences to immerse themselves in the event simply by putting on a set of headphones. 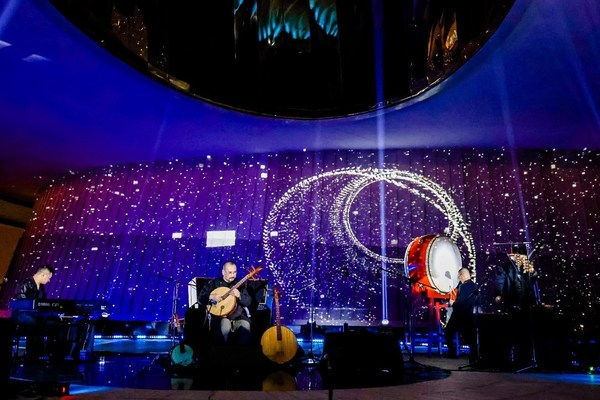 With a number of artists putting on improvised performances with traditional Chinese music instruments including the ruan, the bo and Chinese drums that generate musical notes just like stars in the sky, the concert created a spectacular musical experience that connected the audience with the universe by creating the sensation as if they were exploring the universe in a spaceship. "There are some powerful moments in the music, like a mass of meteorites going through your soul, and you don't get hurt, you feel the power of the universe," said a viewer when posting a comment about the event online.

In ancient times, Chinese sages explored the laws of the universe and life, giving birth to invaluable heritages, such as the 24 solar terms and traditional Chinese medicines. The ancient philosophy that man is an integral part of nature has been passed down through the generations to modern times. "The universe is all things, the earth is a part of the universe, every grass and every grain of sand is also a part of the universe, and of course man is also a part of the universe. It's just that man sometimes attaches some external things to himself, and man is separated from the universe. Maybe, if you give up artificiality and forget yourself, you can become one with the universe," said Mr. Feng. " When people look up at the stars, they may be thinking about other things, and it is difficult to integrate with the universe. If there is music involved, as long as you listen attentively, everyone will forget yourself. The 'I' here is the 'me' in the social model, the 'me' after people grow up and touch social civilization. Pay attention to listening. That social model may still be there, but it doesn't matter anymore. You can hear your heartbeat, feel your breath, breathe with the universe, nothing else. The universe has big breaths, we have small breaths. Their vibrational frequencies are the same."

Mankind has been exploring the universe in various ways since ancient times. "Music is one of the ways to explore the universe in that they have a lot in common," added Mr. Feng. "For example, the universe is full of abstraction, and music is also abstract. Another example is that the universe is dynamic, and so is music. You can feel the dynamics of the universe with your hearing." Mr. Feng delivered an impressive musical improvisation experience without adding any harmony, human emotions or forms to improvised works just like the clouds that are completely natural yet so different from each other. A cloud is something that cannot be designed."

Besides Mr. Feng, the participating artists also included percussionist Yu Lei, keyboardist Han Tianhe, world-renown percussionist Zhao Bing and audio engineer Titus. The concert also featured interactive visual artist Jung Hyun Moon who, through creative programming and audiovisual interactions alongside the accompanying rhythmic improvisation, created a random horizon that allowed the audiences to immerse themselves in the depths of the universe by breathing as one with the universe and feeling its dynamic.

"The universe is relatively eternal and much stronger than the earth when it comes to vitality. It would be wonderful if the audience could forget the self and become one with the universe at some point by devoting their full attention to the concert," stated Mr.Feng. "It's a feeling the logic cannot remember, but the subconscious mind will. It can be beneficial to the rest of your life as you can recall the memory when you need it in the future."

"The event was not only a non-figurative concert but also a meaningful music experiment for cross-border integration," added Linda Shen, the producer of the concert. "Through participation in the live concert, artists from the four corners of the globe have spread love and the healing power of music by using sound drift bottles. A few music lovers with visual impairment were also invited to the onsite event."

The concert was webcast worldwide. Supporting was provided by several organizations, including Shanghai Lingang Culture and Art Foundation, Lingang Service, and Show Life.